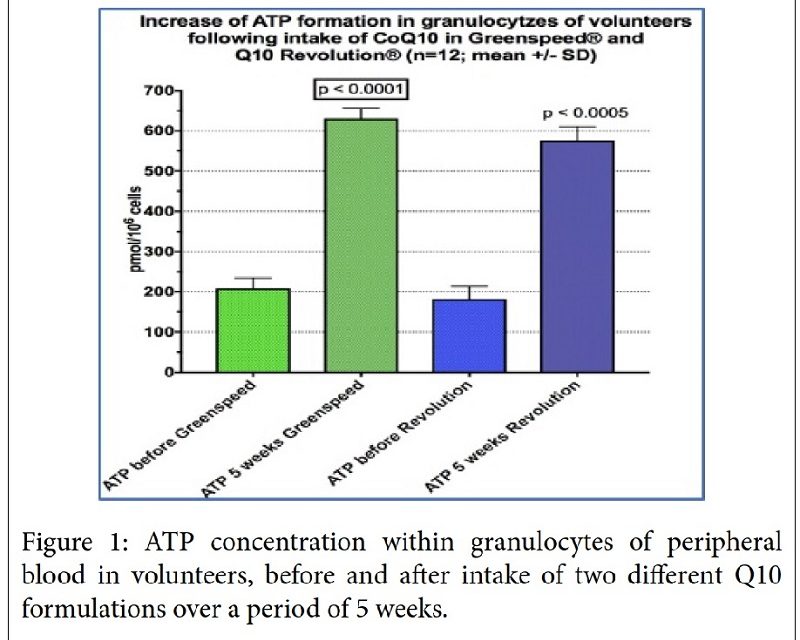 Copyright: © 2018 Freye E, et al. This is an open-access article distributed under the terms of the Creative Commons Attribution License, which permits unrestricted use, distribution, and reproduction in any medium, provided the original author and source are credited.

Objectives
Two new CoQ10 preparations are on the market, of which however, very little is known about their ability to increase ATP production, the final end product in mitochondrial activity. We therefore set out to measure ATP synthesis in granulocytes of volunteers before and after a five-week administration of either Greenspeed® or Q10 Revolution® and sought to determine if this is reflected in some way to an increase in concentration and vigilance.

Methods
12 young healthy volunteers (mean age 21, 10 males, two females) were given either one of the two CoQ10 supplements over a period of 5 weeks in a cross-over randomized double-blind fashion. ATP concentration was measured in granulocytes before and after five weeks, using bioluminescence luciferase probes. In addition, the d2-concentration and stress test was used to determine mental concentration before and after each of the Q10 formulations.

Results
The two Q10 formulations (Greenspeed® and Q10 Revolution®) increased the formation of ATP within the granulocytes following intake over of five-week period. This increase was highly significant following both formulations (p<0.0005), while at the same time it increased concentration and mental performance resulting in a significant reduction (p<0.001) of mistakes within the d2-concentration and stress test. The latter was closely correlated with ATP increase resulting in a correlation coefficient of r2=0.84 for both formulations.

Conclusion
The two CoQ10 formulations (Q10 Revolution® and Greenspeed®) on the European market demonstrate significant increase in ATP synthesis within mitochondria, while at the same time increase mental performance considerably. Both formulations use different strategies of how to increase Q10 getting into the cell since plasma concentrations by their own do not properly reflect ATP synthesis within mitochondria.