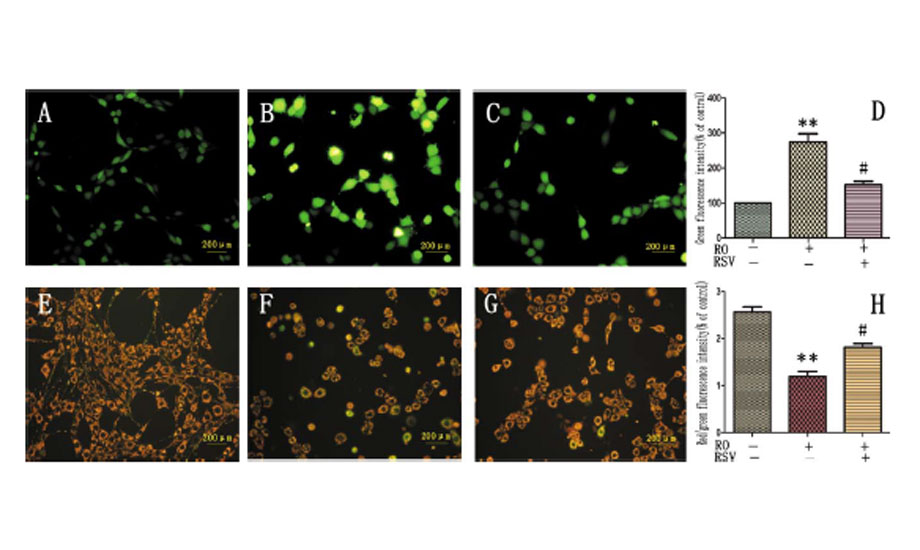 Abstract
Rotenone is a common pesticide and has been reported as one of the risk factors for Parkinson disease. Rotenone can cause neuronal death or apoptosis through inducing oxidative injury and inhibiting mitochondrial
function. As a natural polyphenolic compound, resveratrol possesses the antioxidant capacity and neuroprotective effect. However, the mechanism underlying the neuroprotective effect of resveratrol against rotenoneinduced
neurotoxicity remains elusive. Here, we treated PC12 cells with rotenone to induce neurotoxicity, and the neurotoxic cells were subjected to resveratrol treatment. The CCK8 and LDH activity assays demonstrated
that resveratrol could suppress neurotoxicity induced by rotenone (P<0.01). The DCFH-DA assay indicated that resveratrol reduced the production of reactive oxygen species (ROS). JC-1 and Hoechst 33342/PI staining
revealed that resveratrol attenuated mitochondrial dysfunction and cell apoptosis. Moreover, resveratrol reversed rotenone-induced decrease in SIRT1 expression and Akt1 phosphorylation (P<0.05). Furthermore, when
the SIRT1 and Akt1 activity was inhibited by niacinamide and LY294002, respectively, the neuroprotective effect of resveratrol was remarkably attenuated, which implied that SIRT1 and Akt1 could mediate this process
and may be potential molecular targets for intervening rotenone-induced neurotoxicity. In summary, our study demonstrated that resveratrol reduced rotenone-induced oxidative damage, which was partly mediated
through activation of the SIRT1/Akt1 signaling pathway. Our study launched a promising avenue for the potential application of resveratrol as a neuroprotective therapeutic agent in Parkinson disease. Anat Rec, 301:1115–1125, 2018. VC 2018 Wiley Periodicals, Inc.

An Oldie but Goodie: Lithium in the Treatment of
Bipolar Disorder through Neuroprotective and
Neurotrophic Mechanisms